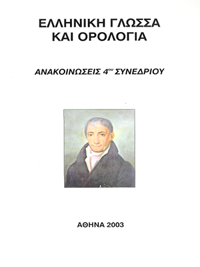 “Design and Development of a Multilingual Terminological Database for the domain of Applied Linguistics”
A. Chidiroglou, P. Arvanitis, P. Panagiotidis.
In the proceedings of the 4th Congress “Greek Language and Terminology” organized by the ELETO. pp. 255-262. TEE, Athens 2003.

This article aims to describe the design and creation of a terminology database capable to operate as a multilingual dictionary of terms referring to Field of General and Applied Linguistics. The text analyzes the basic methodological principles applied and the choices had to be made to the architecture of the database, in order to meet the requirements raised by both the type of storage linguistic information and the way their classification, and the possibility profiled export and swap them with other systems and the need for harmonization of Base with recognized international standards. 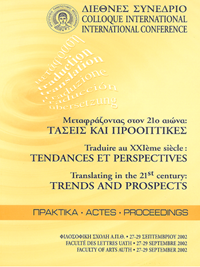 "Uses of Multimedia Databases Systems – MMDBMS) for translating purposes".
In the proceedings of the 1st International Conference in Translation (Translating in the 21st Century: "trends and Prospects", Aristotle University of Thessaloniki, pp.402-415. University Studio Press, Thessaloniki 2002.

This article presents the most important uses of Multimedia Database in the ever - evolving scientific field of Translation. First noted that the Database Systems and efforts for the automatic classification of "information language" of particular concern to the wider field of Language Sciences. Significant efforts can already recorded in the wider area of lexical and lexical research, and in the area of text recognition and automatic translation. 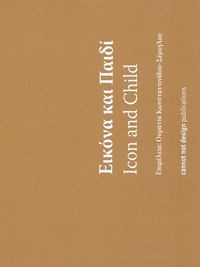 “From the joystic and Lara Croft to Angelina Jolie and Tomb Raider», (in collaboration). 1st Panhellenic Conference on Image and Child, Aristotle University of Thessaloniki, Thessaloniki 2002, pp. 267-278.

This paper presents a short survey designed for the comparative study of the "image" of a computer game hero and a hero cinematographic. The reference point was chosen one of the most popular online games, Tomb Raider, which was then transferred to the cinema and with great commercial success. Lara Croft, a female version of Indiana Jones, is an archaeologist who wanders across the globe in search of lost treasures. Similarly in the film Angelina Jolie interpreted their respective roles. 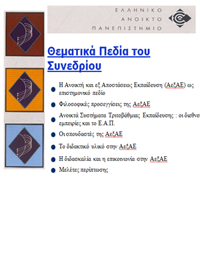 This article presents the product of XENIOS research program , which attempts to answer the problem of language learning course with the development of a software model in six languages , applied in the field of economics and international trade. The main problem of concern to researchers in the case of the use of new technologies is the use of interactivity of E / Y and satisfy the methodological requirements of Teaching . The text of this paper presents the technological solutions given to problems of knowledge transfer and training of trainees .