2013 - Speech Acts in a Virtual World: Design and Implementation 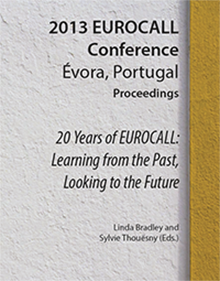 In the first half of the twentieth century, notions such as linguistic structures and student’s linguistic capacity were the traditional elements of any language teaching. With the significant contribution of Halliday and Hymes these notions are yielding their place to the functional use of language and how language is being shaped by the different communicative situations. This new, communicative approach of teaching a foreign language, had led the redefinition of learning objectives and general principles of the teaching act.

The emphasis is on student’s communicative ability, therefore communication play a key role in teaching Language - Civilisation. Simultaneously, with discourse analysis, it becomes clear, that communication is accomplished through written and oral texts. From these texts, linguistic elements derive their significance and meaning; consequently, linguistic elements can not be considered as isolated teaching objectives, but as functional communication structures and conventions inextricably linked with text types.
Speech acts are the core of teaching. Around them, Curricula and author textbooks articulated and they are in perfect relation and connection with both communicative situations and textual genres. It should be noted that genres "include forms and concepts stemming and record functions, purposes and meanings of social circumstances"  and offer the most appropriate medium for the cultivation of linguistic and metalinguistic skills including awareness the relationship between the structural and social aspects of language.
In the Common European Framework of Reference for Languages: Learning, Teaching, Assessment (abbreviated as CEFR), which is widely adopted and accepted as the European standard for teaching and learning foreign languages we find the key notion of speech acts. Speech acts are at the heart of teaching and the core development of communicative language skills in the sense that they describe what learners can do with language in specific contexts or in a particular communicative situation.
But, is there a relationship between traditional speech acts and simulated situations in Virtual Worlds? And furthermore, is it possible to develop learner’s language skills by teaching and using speech acts  in these environments? In the above context, in this paper we first illustrate current needs in teaching and learning second languages, then we discuss the design of a Virtual world and finally its implementation for teaching speech acts of French language in higher education.

Get the full paper here

or at Aristotle University of Thessaloniki-Digital repository

1997 - Interactive multimedia: Use and applications in language teaching and learning in Information Society

1998 - Multimedia Databases: Design, implementation and use in language teaching applications

2000 - Automatic recognition of name entities for information extraction and retrieval